HomeGeneralHow Do You Stop a Dog From Being Aggressive?
General

How Do You Stop a Dog From Being Aggressive? 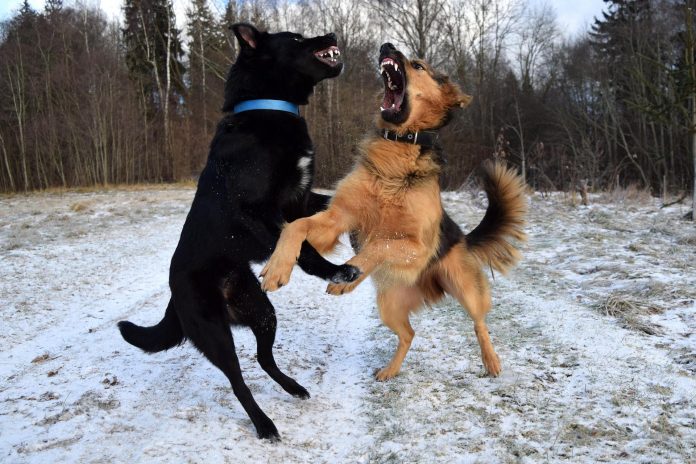 Aggression in dogs encompasses a wide range of behaviors that ultimately may result in a physical attack on an individual or other dogs. Just like most animals and humans, aggressive behavior in dogs can be a response to a perceived threat or a form of social interaction to achieve a certain outcome. Of course, no dog owner wants an aggressive dog that’s always looking for the next confrontation. That’s why it’s important to recognize the signs of aggressive behavior in your dog and take the necessary steps to address them. You can contact professionals, like those at Off Leash K9 Phoenix, to help you and your dog deal with this situation.

Aggressive behavior in a dog can manifest in several ways. For instance,

iii) Suddenly lunging at someone

These are some of the main ways in which a dog manifests aggressive behavior. It’s crucial to remember that these behaviors are not exhibited in any particular order. For instance, while some dogs may begin by growling and snarling, others may lunge at somebody out of the blue. This means that a dog’s aggressive behavior can be unpredictable.

As with humans, fear is a real thing for many dogs. Unfortunately, such fear may manifest as aggressive behavior. For instance, you may encounter a dog in a closed space. With seemingly no escape route, the dog may perceive your presence as an intent to harm. They may become fearful for their safety, prompting aggressive behavior like snarling. However, this snarling is a response to the fear that you’re about to attack them, not any other “behavior” you exhibited.

While some dogs are naturally more antagonistic, many of them express fear in the form of aggressive behavior.

While there are several ways of classifying aggressive behaviors in dogs, these are the main ones;

i)Territorial Aggression: This is a primal thing among many dogs. Just like their wild cousins, the wolves, domestic dogs can become very territorial, lashing out at any perceived encroachment of their “space.” For instance, if a dog is used to having the backyard area around its kennel all to itself, it may not take too kindly to strangers frequenting that part of the house, leading to aggressive behavior.

ii) Protective Aggression: This is aggressive behavior in response to a perceived threat to a person or dog. For instance, a female dog that was once calm and likable all of a sudden becomes irritable and aggressive after having her litter. Similarly, a dog may take to liking her pet owner’s children so much that they may attack relatives and friends that try to interact with the children.

iii) Possessive Aggression: This one is closely related to territorial aggression because it arises due to the need to protect resources like food from perceived threats. For instance, a dog may start to snarl and bark if a stranger approaches its bowl of food. Similarly, a dog feasting on a bone may display aggressive behavior toward an approaching dog.

How to Manage Aggressive Behaviors in Dogs

1)Keep your dog away from other dogs if they have a history of aggression toward other dogs. This should be the first course of action until you can seek professional help for your dog. In the unfortunate event that an aggressive behavior leads to a dog fight, never try to physically separate the two dogs. You run the risk of a serious bite. Always do something to distract them. For instance, you can throw water on them or yell loudly. This can startle them and is more likely to break up the fight.

2) Keep your dog in a kennel or on a leash in a specific part of the house if the dog exhibits aggression toward visitors. Such dogs may view the visitors as violating their territory.

3) If the dog has leash aggression, consider putting a muzzle on them prevents the risk of bites. Of course, this is only a stop-gap measure. You should seek professional dog training to help address such aggression. Such dogs should not be taken to public places. Instead, you can give them exercise time in a private yard.

All in all, addressing the root cause of dog aggression is best done by professionals. Dog trainers that specialize in addressing such unwanted behaviors are best suited to this task.