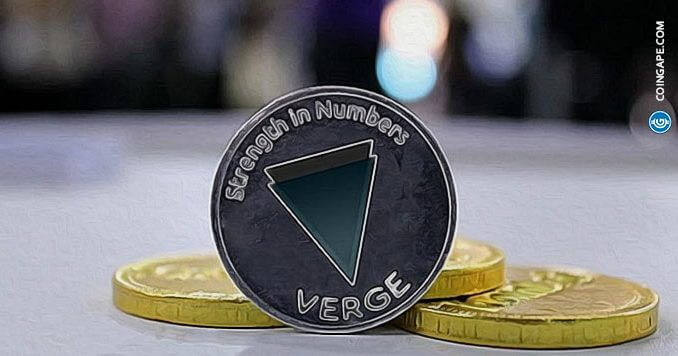 There are more than 20,000 crypto projects on the market. Even though their basic concepts are similar, each cryptocurrency has its own goals to achieve. For example, securing the user’s anonymity is the main purpose for such cryptocurrencies as Monero, Pivx, or Zcash. But all these projects compromise transparency while ensuring anonymity, which is unacceptable for many investors.

If you seek a cryptocurrency that keeps your personal data safe and stays transparent — take a look at Verge (XVG). Learn what Verge is in a nutshell and why XVG is the top choice among privacy coins in our guide. Also, you will find the XVG price prediction below.

Verge was launched in 2014 as DogeCoinDark. It was a fork of Peercoin that was supposed to be an anonymous alternative to the meme-inspired coin. In 2016 it was renamed to the current name Verge.

In 2022, XVG has already reached the top 400 cryptocurrency list. Today, the total circulating supply of XVG has almost approached its limit of 16,55 billion coins. Meanwhile, the market capitalization of XVG is near $53 million, and the price fluctuates around $0.0032 per coin in August 2022.

Verge (XVG): Goals and Use Cases

Despite relatively low market indicators of XVG, the project is one of the well-known members of the “privacy coins” club. It means the priority of Verge is to deliver the highest degree of anonymity within a decentralized and trustless payment system.

To achieve this goal, Verge uses a complex of features. In particular, it allows you to use dual-key stealth addresses instead of permanent ones, so no one can see who is the sender and the recipient. All transactions XVG investors make using their vergePay wallets automatically go through the TOR network. This service anonymizes the traffic and masks the IP addresses transaction participants use.

Thus, Verge is a perfect coin for anonymous payments regardless of the location of the sender and recipient.

Verge cryptocurrency is considered a privacy coin. Moreover, it offers a unique way of hiding users’ identities. Unlike other privacy coins, it does not rely on cryptography techniques but on masking IP addresses. Consequently, XVG is a private but also transparent crypto project.

The price potential of XVG is strongly associated with plans of Verge creators, new updates, and media coverage. Accurate XVG price changes can be predicted by conducting a complex technical analysis. Take a look at the price predictions for 2025-2030 by a few reputable sources.

The XVG price will likely increase by 2025 as new updates and collaborations with other projects are coming.

A less optimistic forecast is provided by this platform — investors should expect at least $0.00390 per XVG in 2025. The average trading price is predicted at the $0.00465 level.

Near $0.021 per coin will be the average trading price according to Technewleader.

In eight years, the XVG price can closely approach its all-time-high price if the interest in the XVG continues its increase.

The first platform on the list forecasts a minimum $0.091 price for XVG in 2030. Furthermore, the average trading price will likely be at the $0.095 level.

Investors should not expect more than $0.0152 price for XVG in 2030 according to this platform. Moreover, the average price will stay closer to $0.0146 in eight years.

Given the characteristics of Verge, investing in XVG seems more suitable for investors who strongly value privacy and transparency. Also, XVG’s relatively low price along with a positive dynamic puts this coin in a better position than its more popular competitors.

So, if you are interested in buying or swapping Verge, go to https://godex.io/ right now and start a transaction in a few seconds.

Share
Facebook
Twitter
Pinterest
WhatsApp
Previous articleJust trust your reaction and succeed these common-sense tips
Next articleUN report: a Turkish-made autonomous weaponized drone “hunted down” and attacked a human target without instructions to do so during a 2020 conflict in Libya: Report Turkishmade Libyastanleygizmodo