HomeInformationHistory of Sushi: A Glimpse of the Past
Information

History of Sushi: A Glimpse of the Past 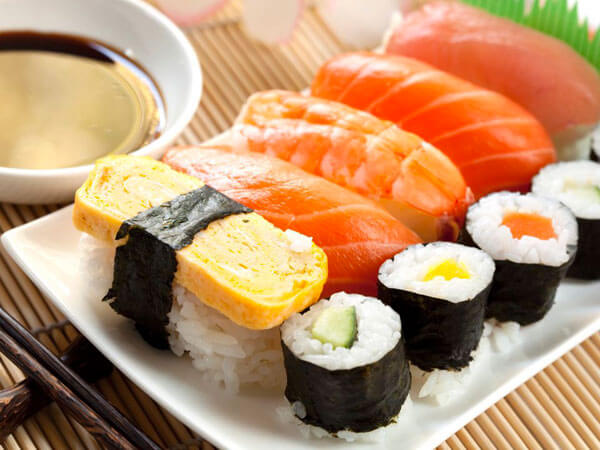 Raw fish is no longer looked down upon in the US, whether you love it raw in a sushi roll, chopped up in a Poke-type sushi dish, or sashimi-style. Almost everyone has at least once tried sushi. No matter what you drink with it—a glass of wine, a glass of sake, a cocktail, or something else—sushi is a unique and tasty way to eat. Fish that is firm and cold, sauce, rice, and other ingredients come together to make a unique and tasty dish. In the last hundred years, sushi has quickly become one of the most popular foods worldwide, and it’s easy to find a sushi restaurant anywhere.

The History of Sushi

Sushi has been around for many, many years. It comes from Asia, specifically China, where rice is grown. Most people think that sushi came from Japan, so this may come as a surprise. That isn’t true. Even though Japan is where most travelers try sushi for the first time, it has its roots in China in a dish called narezushi. The main things that went into this dish were salty fish and fermented rice. And, despite what you might think, it wasn’t fermented and salted to make it taste better. The first time the dish was made was in the second century BC, almost 2,000 years before refrigerators were invented.

Because of this, narezushi was a very useful food. The rice was fermented to keep it fresh, and the fish was heavily salted to stop bacteria and other microorganisms from growing. Even when it wasn’t kept in a cool place, this kept it fresh for longer. Also, it’s interesting that when the fish was eaten, the rice was usually thrown away. It was only used to wrap the fish and keep it from getting stale. The dish went from China to Japan in the eighth century. In 718, when the Yoro Code was written, it was the first time the word “sushi” was used.

Sushi in the Western World

People from Japan who moved to the West after the Meiji Restoration brought sushi there in the early 1900s. But only the rich liked it, and it became much less common as the number of Japanese immigrants fell in the late 1900s. After World War II ended, sushi didn’t become popular again in the United States for a few years. This was because Japan was again open to trade, tourism, and business with the rest of the world. In the 1960s, this trend took off in the United States, and middle-class Americans started to try sushi and love it.

As with most things in the history of food, there is a lot of disagreement about which restaurant brought sushi to the West and it’s not possible to know for sure who was responsible. But the Kawafuku Restaurant in Los Angeles, one of the first places to serve sushi, is often given this title. You can imagine, though, that Americans didn’t start eating raw fish right away. However, by the end of 1960s, sushi had gained popularity and sushi restaurants were opening all over the country.

Sushi is one of the most popular foods in the whole country. Even the most boring eaters have probably tried at least one sushi roll, like a California roll. Chefs always make new rolls and dishes, so you can always try something new. This Japanese food has been around for hundreds of years and is now a modern classic. There are hundreds of various rolls of sushi to try, and every day, new rolls are made. Chefs all over the country are always trying new things, like sushi with raw and cooked beef and other non-traditional ingredients, sushi bowls, sushi burritos, and other new ideas.

Sushi: A Time and Taste Voyage

We hope this short look at the history of sushi in the United States and around the world was interesting. In just a few decades, this dish has become more popular, and it’s always interesting to learn about its history back to ancient times and see how it’s changed and grown cheers to current technologies such as refrigeration that have made sushi available all over the world. And if you love sushi as much as we do, you should go to the best sushi restaurant in your area to see what the chefs have made with both modern and traditional sushi ingredients.

Why is Zlibrary Legal?

The New King of England: Everything you want to know about The Royals